So let’s get a run down on Taylor Swift’s astonishing and outstanding style. 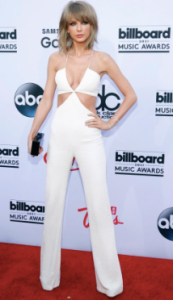 First off let’s start with one of her best outfits, one of my personal favourites, which is the white criss-cross jumpsuit by
Balmain, that she wore for the Billboard Music Awards 2015. Taylor’s outfit was very complimenting for her sleek figure and it gave the young celeb a very glamorous but simplistic look. The dazzling jumpsuit also made Taylor’s make-up stand out and come across very bold because of the enhancing white colour of her outfit.

A similar outfit can be purchased from www.missguided.co.uk.

For only £35, this type of outfit can be worn with mid heels with a wide range of colours, which will match well with the jumpsuit.

However, one of Taylor’s worst outfits, I personally think, would be the playsuit by Mary Katranzou. Taylor wore this outfit for the VMA’s in 2014. I personally think that the letters and the colour of the playsuit isn’t as complimenting to Taylor compared to an outfit such as the white jumpsuit I mentioned earlier. With such a small and slender frame, keeping to a more simplistic style avoids causing too much chaos around a small area. For the VMA’s especially, I was expecting something a little more glam from Taylor with her usual elegant style.

Overall, I would rate Taylor Swift’s Style 4/5 stars. Her overall style is very diverse to be honest. It varies a lot, however this shows to her fans and others that she isn’t afraid to try new outfits and start new trends. Her style is also very astonishing, she definitely turns a lot of heads when she wears particular garments because of her lovely figure. Taylor has the capability to pull almost every style off, even the worst kind of outfits. 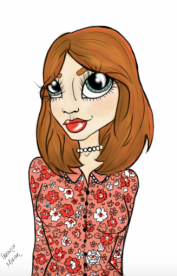